Castle of Serpa and The Walls, in Serpa

The early human occupation of their site dates back to prehistoric times, later Romanized, when he was called Serpa, living with the road connecting Beja south of Hispania. It is believed that here has been a Roman fort with the function to protect this stretch of persurso. With the fall of the Roman Empire, met the presence of Alans and Vandals, when settled in Baetica, the Swabians, when it expanded to the South, and more lasting, the Visigoths, successful, from the eighth century by Muslims, that the fortified. 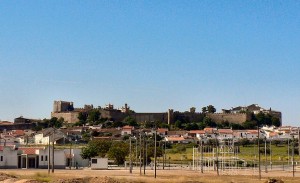 At the time of the Christian Reconquest of the Iberian peninsula, the town and its castle were first conquered or by troops under the command of D. Afonso Henriques (1112-1185) or by the group under the command Geraldo Sem-Pavor in raid promoted in 1166 the territory beyond the river Guadiana.

He returned to the Muslim possession when the great offensive Almohad Abu Yusuf Ya’qub al-Mansur to the river Tagus (1191), when Christians remained in power only of Évora, in the Alentejo. Later, the forces of King Sancho II recover these lands, with Serpa won in 1232 and its areas delivered to Ferdinand, brother of the sovereign.

The castle stands in the center of the village, the two hundred and thirty meters above the sea level. At the highest level, by the wall on the north deploys to fortress, of square plan.

About the village has oval plant, reinforced by turrets and square and semicircular plant towers, topped by merlons prismatic. It was originally tore three monumental gates (Moura Gate, northeast, Beja Port, northwest and Seville port south, the latter now defunct) flanked by two beveled round towers, these merlons with pentagonal shot. The west cloth of the walls is topped by an aqueduct based on arcade go round, joining the Counts of Palace Ficalho, on the north side and a giant daughter based on a well, next to the southeast angle, built in the seventeenth century to supply the palace. In period opened the Door of Corredoura and the New Port.

The wall of the fortress is reinforced by the Keep, of square plan, adjoining south cloth, left to bottom; by a semicircular plant cubelo the same side and a rectangular plan tower in the southeast corner, next to which is still visible part of the Barbican involved. There is installed the Archaeological Museum of Serpa, exposing the evidence recovered in County region, the Paleolithic, Neolithic, of the Metal Age and Roman times.

In the square border to the Church of Santa Maria (old Muslim Mosque) stands the so-called Clock Tower, of square plan, where stands the bell, with tapered shot of pinnacles surrounded by merlons bevelled. Trace the fence of the village, was transformed into watch in 1440, becoming the third watch tower oldest in the country.