São Domingos Mine, in Mértola

The Mine de São Domingos in Alentejo, is located in Pinto Court parish, Mértola municipality, Beja district of Portugal. 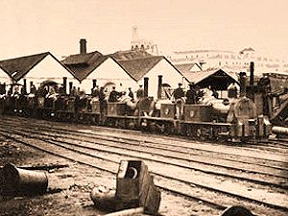 The mine and its village correspond to an old mining couto. Had connection to the river-sea port Pomarão, on the Guadiana river, through a railway, iron reduced way, about 15 km long, the São Domingos Line – Pomarão.

The mineral exploration at the site of Santo Domingo is prior to the Roman invasion of the Iberian Peninsula, during which the work intensified with the exploration of the “iron hat” over the mass Pyrite, for copper exploration, gold and silver.

In 1858 begins the modern mining operations, by mining company of the “Mason & Barry”. The work continued until 1965, depletion of ore and mine closure. During this period, mining was done in the open up to 120 meters deep, and the work continued through shafts and tunnels up to 400 meters.

With the end of mining, the mining village fell into decay. This was the first village in the country to have electric light.