The so-called Battle of Ourique, the meaning and terminating the symbolic characteristics that are associated, is the main epic legend of Portuguese history: the deed of D. Afonso Henriques who, under the divine protection, embodies the heroic and daring act of fight and defeat the Moorish enemy, laid the foundation underpinning the national identity. 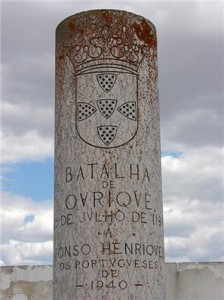 Legend has it and wants to tradition, briefly, that on July 25, 1139, D. Afonso Henriques, guided by a divine mediator, the hermit Leovigildo Pires de Almeida, who announced her the day before the appearance of Christ on the Cross at the site of battle and victory over the infidel, defeated the armies of five powerful Moorish kings.

The symbolic importance that this legend has acquired and the fragile historical support from reports that the report from the fourteenth century, no wonder that there have been, over time, different interpretations and locations for the sacred ground of the battle: the Alentejo town of Ourique ; S. Pedro das Cabeças, in Castro Verde, Ourique Cartaxo, Leiria, Penela, etc.

Although the historical sources not certify the existence at the time of a great battle and be mythical his narrative, the vision of medieval chroniclers (probably inspired by chansons de geste broadcast by minstrels) is clear on one point: was in St. Peter of heads Afonso Henriques challenged and fought the five Moorish kings. It is the weight of tradition and the importance that the place had already acquired in the Portuguese imaginary which are reflected in the visit that Sebastian did to this place on 7 January 1573. In honor of signal, as referring to a coeval document, the monarch came down from his horse, “said some very good words said ‘come on foot” the bollards where the King Dom Afonso Henriques was a great victory against the Moors’ and ordered, in his memory, to arise a’ very sumptuous building ‘.

The topography and local features (the hills set that animate the meadow and the existence in these, of ancient fortifications remains) favored the imagination with some writers describe and interpret the Battle of Ourique, Fr. Augustine of Santa Maria to Fr. Manuel of the Upper Room. (…)

According to historical tradition, was together in S. Pedro das Cabeças that struck in 1139, the Battle of Ourique. A miracle that is portrayed in the coat of arms of Portugal: five escutcheons, representing the Five Wounds of Jesus and the five Moorish kings defeated in battle.